Since the early nineties, a new method for non-invasive monitoring of human brain function has been developed besides already established procedures (PET, SPECT, MEG, and EEG). Functional magnetic resonance imaging (fMRI) allows generation of 3-dimensional brain maps of neuronal activity with a spatial resolution much superior to the previous non-invasive procedures. Pioneering work has also been done in Austria (Gomiscek, Beisteiner et al., 1993) and led to foundation of the first dedicated society for functional MRI (www.oegfmrt.org). fMRI allows to map the activated brain areas identified on functional images to the respective anatomic structures identified on anatomical images. While early studies used contrast agents, the functional contrast is nowadays achieved via detection of local blood oxygenation changes which impacts the intensity of the signal. This phenomenon, also known as BOLD (blood-oxygen-level dependent) contrast, was first described by Ogawa et al. (1990). An increase in local neuronal activity increases local inflow of oxygenated blood containing oxygenated hemoglobin. With oxygenated hemoglobin the magnetic properties of the iron of hemoglobin are masked and do not disturb the local magnetic field homogeneity. In contrast, non-activated neuronal tissue is dominated by deoxygenated hemoglobin where the iron atoms have their full magnetic properties and disturb the local magnetic field. This reduction of local magnetic field disturbance in active brain areas increases the MR signal (= BOLD signal increase in activated brain areas). This principle works when more oxygen is transported into the activated area than can be consumed by the local neural tissue. As a consequence, the oxygen level in the capillary bed increases and the proportion between oxygen-rich and oxygen-poor hemoglobin changes. For clinical fMRI it is important to realize that within pathological tissue, perfusion (rCBF) with oxygenated blood sometimes is already maximized. In such tissue a local increase of oxygenated hemoglobin (HB-O2) cannot be generated. Therefore, BOLD fMRI signals (delta S) cannot be detected in such patients. 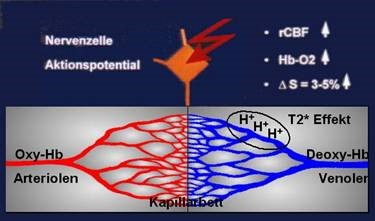 The BOLD response to a brain stimulus develops in time and is called the hemodynamic response function. This function depends strongly on the conditions of the stimulation and must be taken into account when planning the measurement. Shortly after the onset of the stimulation there is a short decrease of the BOLD signal. In the following, the increased blood flow induced by the stimulation causes an increase of the signal starting about 1-2 seconds after the onset of brain activity. It may well take up to 10 seconds until the maximum of the signal is reached. After cessation of the stimulus, the subsequent signal decrease is also strong and usually undershoots the original signal level for a few seconds. With a field intensity of 1.5 Tesla, the BOLD signal generated by a stimulus has a size of about 3-5%. This means the baseline MR signal is increased by 3-5% due to brain activation. For such small differences, ist is important to repeat stimuli to reduce the influence of artifacts. BOLD signal increases with high field (3 Tesla) or ultra-highfield (7 Tesla) MR systems, but unfortunately also artifacts increase (Geissler et al., 2014). Nowadays several sophisticated data analysis techniques exist to infer the functional status of a brain from fMRI data. These include statistical evaluation of local brain activation, activation of complete brain networks – including the connectivity of the network nodes – as well as multivoxal pattern analysis (Stippich (Ed) 2015).

This website uses cookies to improve your experience while you navigate through the website. Out of these cookies, the cookies that are categorized as necessary are stored on your browser as they are essential for the working of basic functionalities of the website. We also use third-party cookies that help us analyze and understand how you use this website. These cookies will be stored in your browser only with your consent. You also have the option to opt-out of these cookies. But opting out of some of these cookies may have an effect on your browsing experience.
Necessary immer aktiv
Necessary cookies are absolutely essential for the website to function properly. This category only includes cookies that ensures basic functionalities and security features of the website. These cookies do not store any personal information.
Non-necessary
Any cookies that may not be particularly necessary for the website to function and is used specifically to collect user personal data via analytics, ads, other embedded contents are termed as non-necessary cookies. It is mandatory to procure user consent prior to running these cookies on your website.
SPEICHERN & AKZEPTIEREN